There are five different types of Person, or Roles, each of which provides different levels of access to documents and functions within fileplan. These are assigned to a Person when it is created or can be edited later. 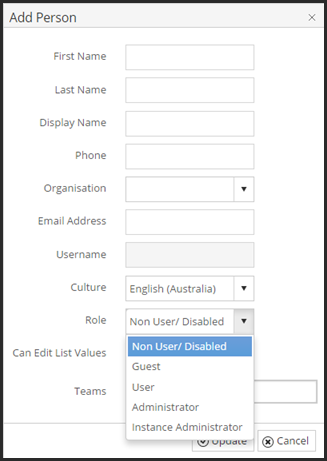 Non-User/Disabled: This Person has no access to fileplan or documents and is not counted against the licence count for this instance. This role is often assigned to users who are no longer active within fileplan but who are needed to preserve historical records of activity.

Guest: This is the lowest level of access available for fileplan. These users can view documents but cannot edit them or upload new documents. Guests also have restricted access to the functions in fileplan. You can use the Guest role to allow customers and suppliers to have controlled access to specific folders.

User: The most common type of Person, this user can upload and edit documents but cannot perform administration activities within fileplan.

Administrator: This type of Person has all the permissions of a User, but also has the power to perform administration activities within fileplan, like making libraries, lists and adding people.

Instance Administrator: This Person is an Administrator who also has permission to manage the fileplan subscription.